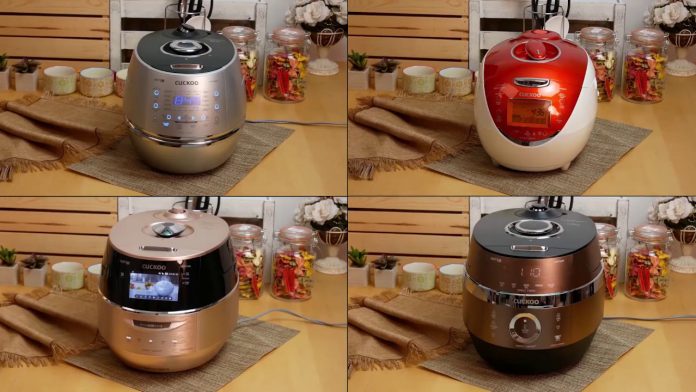 Turning out flavorful, fluffy and evenly cooked rice every single time isn’t easy. Sometimes you may undercook it, use too much water or even burn the rice if you’re not paying attention. That’s why it’s handy to use a rice cooker.

Rice cookers consistently cook perfect batches of rice every single time, and require little to no supervision. To be fair, some are better at cooking different types of grains than others and we’ve reviewed a number of different rice cookers across several price points and sizes.

Today, were going to focus on Korean rice cookers. Germans are known for engineering prowess and French for luxury fashion, well in Asian cultures, the Japanese and Koreans make the best rice cookers.

Probably because they consume more rice per capita than any other culture and because they had a massive head start on making rice cookers. But that’s another story.

We already selected the Cuckoo Rice Cooker as being one of the best rice cookers available. Cuckoo is the most popular brand in South Korea and this may be the rice cooker that gives you the most bang for your buck.

Cuckoo and Zojirushi offer really high end rice cookers, like the Cuckoo CRP-P1009SB, that cater to the most demanding consumers in their market, but some of us don’t want to spend hundreds of dollars on a rice cooker.

Well if you still want a Korean manufactured rice cooker without breaking the bank, the CR-0631 is for you.

Cuckoo is the best selling rice cooker brand in South Korea. And for good reason. Their most popular model the Cuckoo CR-0631 is a highly rated cooker that makes the best brown rice of all the rice cookers. And it makes both brown and white rice about 10 minutes faster than the Zojirushi cookers.

Design: This is a pressurized cooker (hence the 20 minute cooking time) with a sleek and cute pink and white design with voice navigation buttons on the front of the display.

It has a nonstick inner coating aluminum pot that should make cleaning a breeze and the pot has a flat bottom with curved sides to ensure even cooking all around.

Capacity: It has a relatively small capacity of only 3 cups (uncooked, 6 cups cooked) rice so this will only be suitable for couples or infrequent rice eaters.

Downside: It’s not foolproof so you have to measure the rice to water appropriately but so long as you do, it can make any type of rice. The downside of course is that it cannot be used to do anything other than make rice.

Bottom line: Still, this a popular choice among rice cookers because it offers great performance at around $100, making it an Amazon’s choice.

This is a Korean-made rice cooker with a 10 cup capacity which is more than enough to feed a family of 4. Cuchen is an establishes brand in Korea and this cooker also doubles as a pressure cooker.

The pressure cooker has a keep warm setting for up to 24 hours, and will preserve the texture and flavor of the rice making it perfect for leftovers, or perhaps lunch the next day.

We’ve noted how some cookers are better for making brown rice than others, due to its notoriously tougher grain. Well the Cuchen shouldn’t have any issue making brown rice as the rice turns out flavorful and moist every time.

It has the ability to be voice-controlled (in Korean as well as in English) is a nice touch as well.

It has a sleek design that reflects its powerful features.  Most notably, it offers both induction cooking as well as pressure cooking. You get two machines in one and your options for meals are greatly expanded because now the Cuchen can be used for recipes that call for slow cooking.

The only downside is that there isn’t a quick cooking option since it’s a pressure cooker but, perhaps a bit obviously, there’s a slow cooker option. And it’s of course a fantastic rice cooker. And steamer. The only question is whether it’s worth the price.

This is another solid Korean Rice cooker from Cuckoo. It’s certainly more pricey than the CRP-0631F rice cooker but understandably so as it offers a few more bells and whistles.

As for the basics, it has a capacity of 6 cups, a diamond coated inner pot and a sleek exterior design.

Let me rephrase that, there’s really nothing basic about this cooker as it looks awesome. How does it perform?

It has the ability to cook a wider variety of food due to its more advanced cooking logic.  For example, you can make porridge, pineapple upside down cake or even potatoes and of course all the variations of rice you can imagine, from brown and white to even “glutinous” rice. Even breakfast, imagine a cooker that can make oatmeal and grits!

Variety in cooking is essentially what you’re paying for. It’s a pressure cooker so you can make more meals with it, and although the CRP-0631F has fuzzy logic so it can cook a wide variety of grains, this Cuckoo rice cooker’s cooking logic is a bit more advanced, allowing it to make much more than just rice. The only downside is that it costs nearly twice as much.

Buying a new rice cooker can be a bit of a confusing activity. Rice cookers have evolved from being simple, heat-plate driven equipment to versatile microchip-driven devices that you can actually program before you load the rice grains.

Finding the right rice cooker for your needs requires a bit of foreknowledge to ensure that you will get the best value for your money.

Three are 3 top factors that you should take into consideration before buying a rice cooker online or from a brick-and-mortar store:

Are you cooking for yourself or for your whole family? How much rice do you regularly consume in a day? These are just some of the questions you can ask yourself when selecting the right capacity for your new rice cooker.

Rice cookers come in a variety of capacities; some can handle 1-2 cups of rice while others are behemoth cookers that can handle up to 12 cups of rice at a time. It would be best to select a capacity that is slightly higher than your usual consumption so you can cook extra rice when you have company.

Avoid buying ultra-capacity rice cookers as these machines consume the same amount of electricity even if you are just cooking 1 or 2 cups of uncooked grains.

You will end up spending more because larger capacity rice cookers are equipped with much larger heating elements that require more electricity to function normally.

Advanced cooking features and a high capacity wouldn’t be of much use if your rice cooker decides to “retire” after five months. To be sure, every rice cooker we’re reviewed is from a reputable brand and offers a solid warranty. That said, you may be tempted to buy a $15 generic rice cooker. Pay a little more and get something that will last.

A durable rice cooker should be able to faithfully serve your kitchen for years, not months. The reliable method of ascertaining the durability of devices such as rice cookers is by checking the feedback rating of consumers online.

Be sure to read feedback that pertains to the rice cooker’s general hardiness in the kitchen.

It is quite common for dedicated online buyers to give reviews months after they’ve purchased an item to give other consumers a glimpse as to how a particular brand performs once it is brought home to be used regularly.

We also advise people to purchase rice cookers that are manufactured with stainless steel and not painted metal as these are better suited in hot and humid kitchens. Stainless steel rice cookers are also aesthetically superior to “spray-painted” rice cookers with colorful designs.

Modern rice cookers are now more versatile and sophisticated than their older counterparts. Check your rice cooker if it offers an ideal set of features that will allow you to cook a variety of rice types (not just white rice or brown rice).

It would also be ideal to check if the rice cooker has been designed with fuzzy logic technology, which allows the user to set pre-programmed instructions before cooking rice.

Fuzzy logic technology is now a staple feature in mid to high end rice cookers because it’s convenient and it allows the user to control not only the cooking temperature but the texture of the cooked rice.

Here are our recommended rice cookers depending on your budget