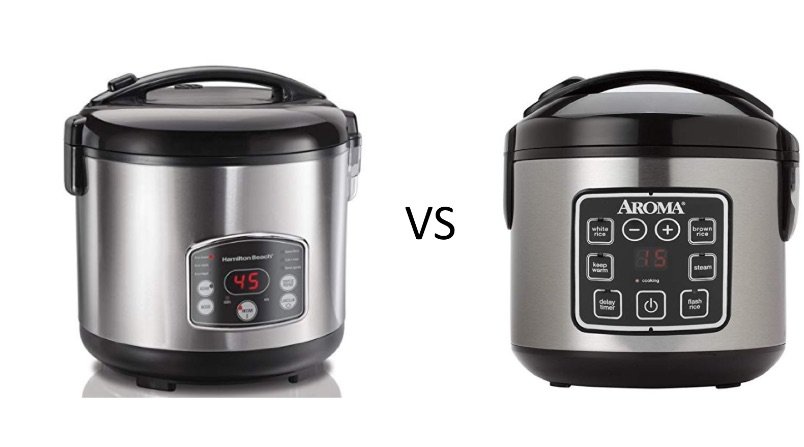 We’ve already reviewed some higher end rice cookers for those who demand excellence and perfection from their rice cookers.

But what if you’re on a budget and just want something to get the job done quickly without breaking the bank. Well both Aroma and Hamilton Beach offer solid rice cookers at affordable prices (less than $40).

But given that the rice cookers are remarkably similar, we’ll take a closer look at each one to let you know which one might be best for you.

Hamilton beach is a well known brand here in the US and they have been making quality cookware for many years.

Today we’re going to take a look at their most popular rice cooker line to date: the Hamilton Beach 37518 Rice Cooker. This is a very affordable rice cooker that has many of the same features as higher end rice cooker models. And it’s really fast.

It can make a variety of rices: from white rice to brown, rice, short or long grain, grits, cream, quinoa and more. It is also a versatile device allowing you to make more than just rice as it has the ability to steam, heat, and simmer food as well.

The Hamilton Beach rice cooker has a stainless steel design and black design. Its actually fairly compact and wont take up too much counter space, even for the larger capacity models.

There are different models with different capacities ranging from 2 as many as 14 cups of uncooked rice. We’ll focus on the 4 cup model, which translates to 8 cups of cooked rice.

The Aroma ARC Rice Cooker is an excellent and affordable option with over 10,000 Amazon reviews giving it an average 4 star rating.

This is also a very affordable and versatile rice cooker that offers up the ability to make white rice, brown rice, soups, roasts, quinoa, chili, oatmeal and more.

Like the Hamilton Beach rice cooker, it also has a steamer insert allowing you to cook meats and vegetables above the rice that is cooking in the unit below.

The Hamilton Beach rice cooker has a stainless steel design and black design as well, a stay-cool touch control panel, and a non-removable hinged lid that locks in moisture and steam to produce fluffier rice.

There are different models available with varying cup sizes ranging from 4 to as many as 20 cups.

Our Take: Most rice cookers under $50 don’t have the capability to cook anything more than white rice. They also don’t have timer functions or the ability to cook large capacities of rice. These rice cookers claim to have both. However, the Aroma was given the coveted Amazon’s choice seal and has over 10,000 reviews and is slightly less expensive overall so it’s clearly the people’s choice.